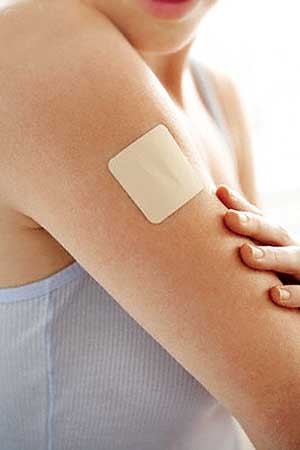 November 10, 2009 — An important head-to-head study of smoking cessation therapies shows that combination treatment with a nicotine patch plus lozenge almost doubles the rate of abstinence at 6 months compared with placebo, new research suggests.

"This is the first time that a head-to-head study has been done looking at all the different smoking cessation pharmacotherapies, and it's also one of the first times that combination therapies have been looked at in a large sample," said lead author Megan E. Piper, PhD, assistant professor, Center for Tobacco Research and Intervention, School of Medicine and Public Health, University of Wisconsin, Madison.

"When you get a 40% quit rate at 6 months in a group, that's really promising for smokers who are trying so hard to quit."

The study was published in the November issue of the Archives of General Psychiatry.

The trial included 1504 adults who smoked an average of 10 or more cigarettes a day for at least the past 6 months and were randomly assigned to 1 of 6 interventions:

The protocol included 3 in-person baseline sessions, during which researchers collected relevant medical history and vital signs measurements and carried out a carbon monoxide breath test. The last baseline visit took place between 8 and 15 days before the quit date.

Patients had study visits on their quit day and at 1, 2, 4, and 8 weeks postquit, during which vital signs, adverse events, and smoking status were recorded.

The researchers looked at several measures of cessation success including being able to quit for 1 week after the designated quit date; being abstinent for at least 1 day during the first week of an attempt to quit; the time to first lapse, defined as the first cigarette smoked after quitting; and the time to relapse, defined as smoking on 7 consecutive days after the quit date.

This patch/lozenge combination came out ahead in a number of other measurements. It, along with the patch alone, was the most effective at helping patients stay abstinent for at least 1 day during the first week of an attempt to quit. In addition, the combination tended to produce more positive outcomes than other treatments on days to lapse and days to relapse.

All the interventions appeared safe and well tolerated. Only 4 of 1504 participants withdrew from the study for medication-related reasons.

People who had tried to quit before this study were evenly distributed in the various treatment groups, so the success rate was not a result of it just being the right time to quit for subjects.

"Let's say everyone was going to quit if it was their sixth time, but we randomly dispersed all the people who were at their sixth time across all the different treatment conditions, so that shouldn't have too much of an impact in terms of comparing the conditions," said Dr. Piper.

Successfully quitting after several failed attempts could at least partially be attributed to "skill building," she said. "Some of it is just learning the triggers, learning what you can and can't do and still be able to stay smoke free, and learning how to cope with withdrawal over time."

The authors speculate that the patch/lozenge combination might produce an additive effect. "When you put a patch on, it's steadily putting nicotine into your blood, and so it's generally taking the edge off some of your withdrawal all the time," said Dr. Piper. "But some people have times when they always have a cigarette — after a meal or when stressed at work, for example. These people can use the lozenge instead of going for a cigarette in those moments of intense craving."

Dr. Piper believes that the counseling sessions played an important role in successful smoking cessation. Some healthcare providers provide such counseling, but smokers across the country can also access a national quit line () that provides over-the-phone coaching. "And if you're interested in face-to-face counseling, they will help you locate clinics or groups or classes in your area."

All the treatment interventions used in the study, except for bupropion, are available without prescription, and most are covered by health insurance plans, said Dr. Piper.

It is unfortunate that the study did not include varenicline (Chantix, Pfizer), commented Alexander Glassman, MD, head of clinical psychopharmacology at New York State Psychiatric Institute and professor of psychiatry, Columbia University, New York City.

"Studies show that this drug used alone is superior to bupropion, although these studies excluded patients with depression and schizophrenia, many of whom smoke," he said.

As for recent concerns about the safety of this drug, Dr. Glassman said reports during phase 4 (postmarketing) evaluation are "notoriously unreliable."

This new comparison study reinforces the notion that combination therapies are superior to single therapies, said Dr. Glassman, who runs a smoking cessation research clinic and has done research on smoking and depression. He noted that although the patch plus lozenge was superior to other treatments, the other combination used in the study — bupropion plus lozenge — also fared well.

After reading the study, Dr. Glassman will consider using the lozenge more often in his practice. "The authors convincingly showed that the lozenge can work just as well as bupropion as an add-on treatment or as a combination treatment," he said.

The lozenge is a relative newcomer to the smoking cessation scene and may not be as well known or as commonly used as the patch, he said. The lozenge is better than nicotine gum, as the release of nicotine is controlled and not dependent on chewing method.

Dr. Glassman stressed that not all smoking cessation tools work for everyone. "Some people have trouble with the lozenge — they get nauseated — and some people will feel jumpy and not sleep well on the bupropion."